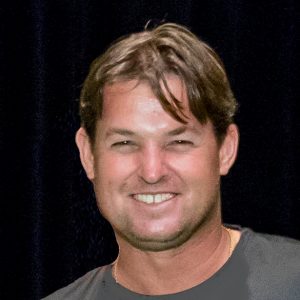 Outside the Porsche Arena in Neckar Park, Patrick Dempsey plays soccer with a small child. An auto aficionado, he is presumably here at the 2019 Porsche Tennis Grand Prix to promote women’s tennis. There are rumors, however, he received a free Porsche just to allow his face to be photographed with more than a thousand drooling admirers who popped 300 euro for tickets to this event. While Dempsey’s face may not be worth the asking price (several women say otherwise), the tennis inside certainly is. Here is an acute glance at Stuttgart’s WTA tournament from someone who doesn’t write about tennis.

Before play begins, players perch on small stages surrounded on three sides by a stout German crowd. When they walk onto the court, red puffs lift from their shoes and yet you sense no one cares how aesthetically pleasing this whole thing is. Because this is indoor tennis, four short black walls surround the courts. Missed first serves carom at obtuse angles and you can imagine there’s a group of BMW corporate recruiters taking notes on which ball kids are likely to make it through their German engineering classes based on some pretty impressive geometric anticipation. The less adept youngsters tend to flail and whimper.

Behind one end of the court, atop the wall, is a net, which protects spectators from errant serves. Apparently they ran out of material, because the other end of the court suggests open season. I’ll come back to this in a minute. In April, Stuttgart hosts Washen (pronounced Veshen) where thousands of lederhosened locals come to revel and play at one of the world’s largest carnivals. Note: It may actually be pronounced “Vasen” but with the amount of alcohol being consumed…. With names like Demonslayer and The Beast, the rides here resemble bad dreams. One contraption hurls people two hundred feet skyward before flipping them upside down and spinning them as they tumble back toward earth. One of the more popular courting-rituals is ScheiBen, a series of moving metal animals, which chest-puffing males shoot with bb’s to win stationary stuffed animals for their significant others. The targets are small and elusive, so when someone hits one, spectators laugh and cheer, which brings me back to the serving situation at the tennis arena. When a 110-mph, Wilson 3 skulls a spectator, the fans rejoice. That a Grandma can take a header in front of fifteen hundred fans and the universal reaction is muffled laughter seems like it could signal impending death for international empathy (or overdramatized).

In the crowd, enough blue eyes and spiked blond hair appear to make you wonder whether Billy Idol cloned himself and then threw a tennis tournament. Let’s not even mention the amount of pretzel dough.

The women who sweep the courts and polish the lines are effectively the tournament’s chambermaids. With dragnets and brooms, they come out after each set and tend to be more athletic than your average spectator. The Fila uniforms and professionally- groomed hair make German men whistle through their beer foam.

Aside from the red clay, most things inside the stadium are black – the floor, the curtains, the court walls, the seats. All of this appears aesthetic until you wander around the city and listen to some of Stuttgart’s stories. One of the more popular German fairy tales details the life of a little boy who, we find out on page one, won’t eat his soup. Over the next twenty pages, the rebellious child grows slimmer and slimmer until the final page displays a tombstone with the boy’s name on it. This is apparently supposed to teach a lesson. I’m convinced the monochromatic decoration now playing a role in German sports entertainment are the consequence of such morbidity.

For those willing to eat their soup though, Stuttgart’s event is a foodie paradise. The city brings out its top chefs for this affair and those 300-euro ticket holders get their money’s worth. The VIP room is a basketball-court sized fine-dining hall with food stations along the walls. Perfectly-manicured couples dressed in French fashion huddle around vintage wines and miniature sushi plates while diamond-earringed wives bang shoulders with sweaty coaches and players just to get a taste of the homemade pastas and sauerkraut-encrusted filet mignons. The foam-covered desserts, the all you can drink cocktails and the artistically-presented plates make this tournament a candidate for an honorary Michelin.

The court surface is soft clay over wooden boards. Imagine a memory foam mattress on a prison cot and I think you get close. When the ball lands, there’s a hard thud but a low bounce, like when you fall out of warrior three in yoga class.

Stuttgart also provides some nice players perks. Any top ten player winning their first-round matches automatically receives a free Porsche (get your daughters into tennis!) Better yet, Porsche lets the players test drive any car for the week, and if it happens to come back totaled after a 180mph wreck on the autobahn, “don’t worry about it, we gotcha covered.” A side note to this “free ride” gives a glimpse into the true competitive mindset. If nothing else, these athletes hate to lose. Thus, when given the keys to a 400-horse-powered machine, there’s an inevitability. When they return from their drive, they all have the same trophy photo – two hands on the wheel, an open-mouthed smile, and a shot of the speedometer going faster than ATP serves. You can guess what the Instagrams and hashtags will be this week.

The Targa convertible which goes to the tournament’s winner is just the kicker. That the Mercedes-Benz Headquarters is less than a hundred strides away has to be driving them nuts.

Of the world’s best tennis players, most are here. Because this is the final day of qualifying, they are wandering around doing press conferences, visiting the VIP room, thundering down the Autobahn and taking selfies with Patrick Dempsey (ok, yes, I’m envious of that face). Main draw begins tomorrow, but I’ll leave the tennis journalism up to Amy Lundy.

Craig Cignarelli, a faculty member of The Tennis Congress, has been a dedicated and passionate tennis coach for 25 years and helped take several juniors to #1 national rankings – earning the distinction of being “one of the most successful developmental coaches in the country.” He is co-developer of the innovative “GRIPS” program, which progressively builds tennis skills for juniors and adults. Craig has coached several national champions, dozens of top college players, and has traveled around the world as coach to players on both the ATP and WTA tours.