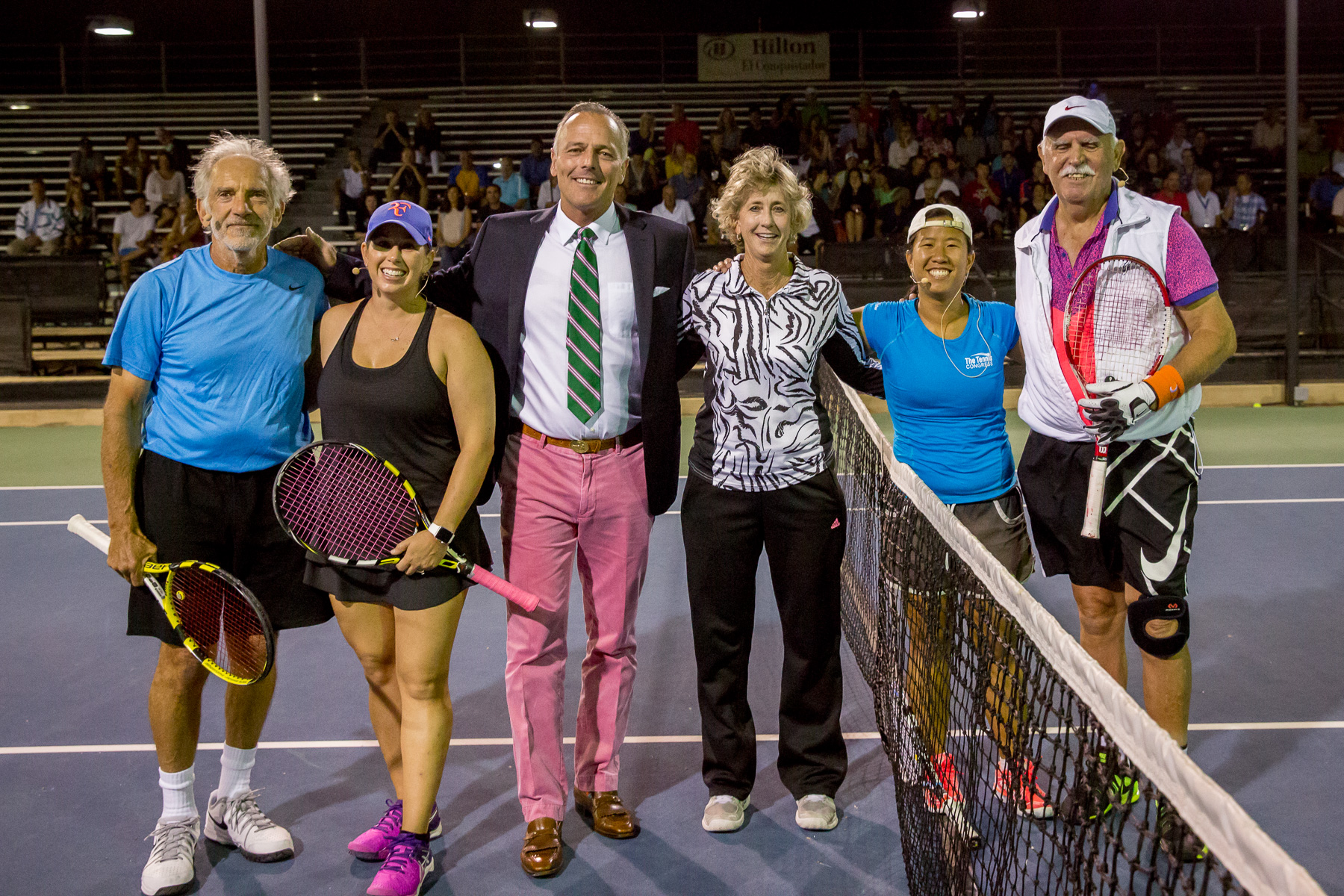 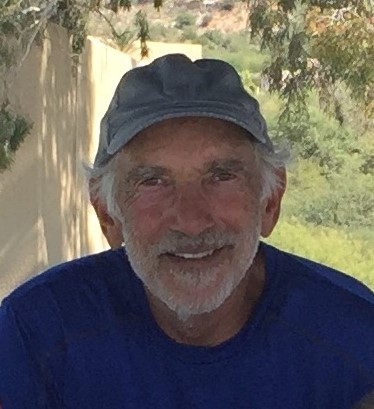 A few weeks before the 2015 Tennis Congress, which I was about to attend as a player, P.J. asked if I would be interested in playing an intergenerational, mixed doubles exhibition match. At first, I hesitated, but after a week went by, though still uneasy about it, I said yes.

I could not have anticipated how it would all unfold for me. After the match, I sat in my hotel room, sorting out what had just happened.

On Friday, our first full day, I happened to sit down for lunch next to Sam Connell with whom I had the following dialogue:

Sam: First time at the Congress?
Me: Yup
Sam: Like it so far?
Me: I do. It has a wonderful energy.
Sam: Goals? Have any specific goals while you’re here?
Me: Yeah. I’d like to increase my comfort and ability in singles match play. I’d like to eliminate the chatter.
Sam: Eliminate the shadow. I like that. I can use that in my Tai Chi.
Me: Oh. You’re the Tai Chi guy.
Sam: Yeah.
Me: I’m coming to your class.
Sam: Oh good.
Me: But I didn’t say that. I said chatter. But shadow. That’s kind of terrific.
Sam: Well, thank you for giving that to me.
Me: I didn’t.
Sam: Well, actually, you did. It came from this interaction. We did it together. Isn’t that great?

On Saturday evening, after another full day, as I was walking down the golf course hillside pathway toward the grandstand court on which I was to play the exhibition match, I had an impulse to just stop and take a deep breath.

The grandstand lights were just coming on in the twilight, the golf course green was growing toward black and it was all very quiet and beautiful. As I stood there, alone in the quiet, a warm flush of energy to my chest made me smile.

I was thinking of my father who loved this game so much. How excited he would have been to have been a part of this. Or even just to have seen me being a part of it.

Where else could I possibly have wanted to be at that moment? Was there anything I could have wanted more than to be playing tennis in the next half hour, doubles, opposite Owen Davidson, mic’d on a grandstand court, lit for night in front of a bunch of tennis crazed adults? 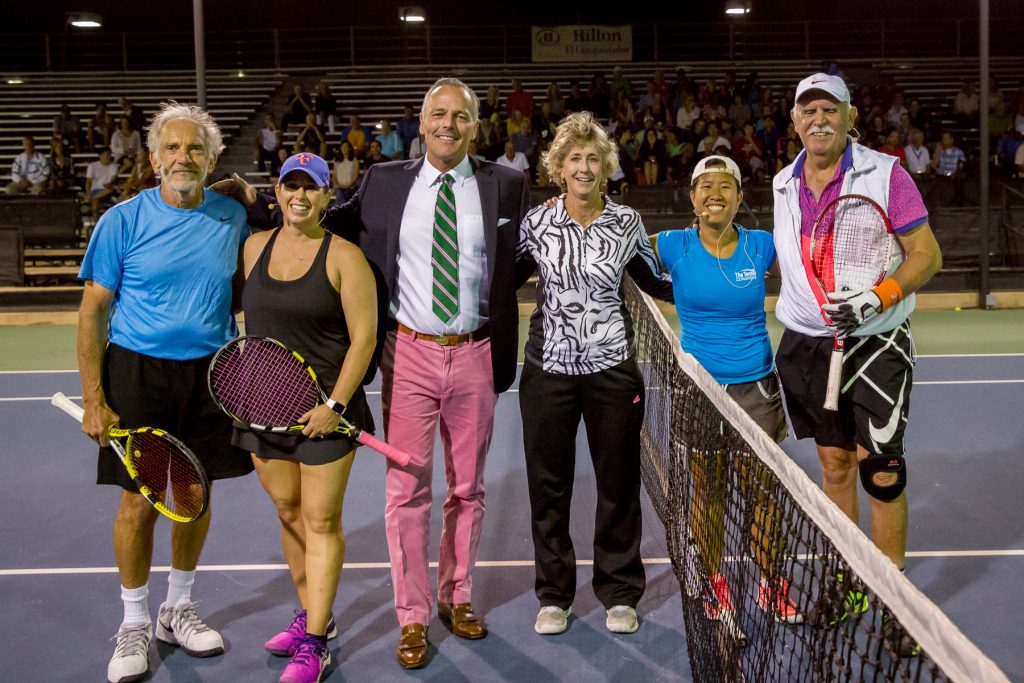 It was like an actualization of some unimagined fantasy, akin to my playing for the Dodgers in the seventh game of the World Series, a boyhood dream I had acted out over and over again, often into twilight, with my childhood friend Ezzy Newnew.

And as I stood there in the joy of that moment, something unfolded, unknotting what had been entangled for me for so many years.

Nerves are the result of fear, of course. In competition, as in most everything else, fear of failure. But I had never been able to disempower my nerves so as to diminish the intensity their effect had on my ability to perform well. In fact, over the years, compounding the problem, I had even become fearful of the experience of nerves itself.

But standing alone in that beautiful moment in the quiet of the early evening, feeling both the pleasurable excitement about what was to come and the nerves beginning to rise, it suddenly stood in stark relief that whenever I were to put myself on the line, a case of nerves would surely be there, the by-product of, and its intensity in direct correlation to the importance the event would have for me.

There was comfort in the simplicity of that!

Fear will always be an inescapable element of anything that matters, a signal of its importance. I can recall Rod Laver saying he would stop competing the day he no longer felt nerves before a match.

Was there a desire to succeed? Yes. A fear of failure? Yes. Would there be a case of nerves? Yes. But the specter of nerves of which I had become fearful might now augur the approach of a welcome stimulant.

And indeed, half an hour later, as I walked out onto the court, I felt unusually present, my nerves, like a familiar traveling companion of whom I had little fear, energized me and heightened the experience of that exhibition match.

My goal to increase my comfort and ability to play had been realized. And more.

I love tennis. At 78, it’s been a matrix thru which I have traveled a lifetime path which hopefully has taken me a bit closer to becoming the person I want to be.

And I’m still working on that backhand.

© Victor Lobl, 2018. Unauthorized use and/or duplication of this material
without express and written permission from Victor Lobl is strictly
prohibited. Excerpts and links may be used, provided that full and clear
credit is given to Victor Lobl with appropriate and specific direction to the
original content.